April Colors of the Month

Colors for April were Night of Navy, Daffodil Delight, Cherry Cobbler and Old Olive. I know most of you would never put these colors together, but I found that they can be very pretty together. 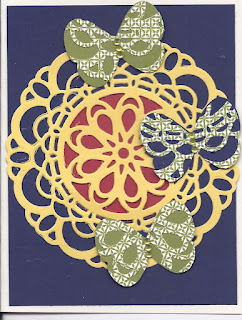 Have you ever had something in your head and you have to do it no matter what? When I started planning this card, I had something in mind and the focal point was to be the doily. I wanted the yellow on the blue. I then needed to figure out how to put the green and red on it and make it attractive. I liked what I had before I added the butterflies, but...
As I sit here looking at this card, I see my mistake. I should have made the card smaller.
In case you can't tell, I still haven't found my creativity, so any suggestions for future reference would be greatly appreciated.  I like the doily and the butterflies and I want to use them again.
The doily is cut with the SU Large Paper Doily sizzlit and the print on the butterflies is also cut from the doily sizzlit. I saw the butterflies done like this in one of the catalogs I think. In any case, it wasn't my idea originally.
Posted by Just Me at 10:43 PM 3 comments:

I have been very lazy lately. Actually I lost my mojo, whatever that is. When people can't seem to create, they say they lost their mojo. Well, I have been in a non-creative place for a couple of months now. Since I haven't been here for quite a while, I will fill you in on some things. In March I took a vacation; no housework, no cooking, no kids, no responsibilities except for myself. 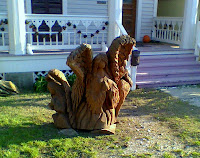 We drove down to Galveston, TX twice and spent the better part of both days there. Went shopping along the Strand, visited the exhibit "The Body Revealed" at Moody Gardens and had lunch at a little place called Eatcetra. food was delicious.

I went to Galveston with my camera and took pictures of ab-so-lutely nothing!! Oh, the pictures you see, well I took them a couple of years ago with my phone. That time I didn't take my camera to Galveston and I really should have. 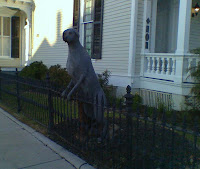 In September 2008, Hurricane Ike roared through Galvestion and left so much devastation. The salt water from the storm surge killed thousands of trees.The pictures on the left are tree sculptures that were carved out of some of the dead trees. My pictures do not do them justice.

The woman in the bottom picture had a note on her requesting donations. I don't remember what the donation request was for.. 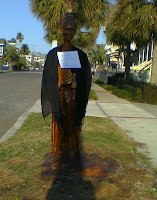 We didn't take time to drive around Galveston this year, so I didn't get any new pictures. I'm putting that on my list of things to do next year.

I hope you enjoy the pictures I took. At the web address below, you can see more of these sculptures, including the three I have posted here. It also gives the addresses of the carvings.

Just Me
My name is Joyce and I have been married to my DH for a whole lota years. We have 3 children and 5 grandchildren

Add Snippets to your site